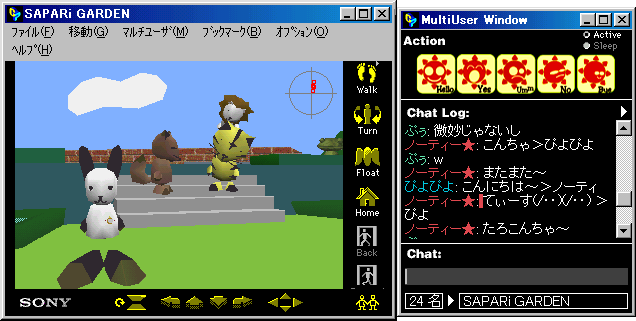 Over the years, I've had dozens of projects and ideas. Most of them have been worked on for a while and are still being conceptualized.

Some of these ideas, however, aren't as lucky and get left behind on the cutting room floor...
I either didn't like how things were going for them or I got too busy with some other stuff in my life.

Whatever the case, I decided to make this page serve as a cemetery for all of these cancelled ideas. I hope you find all of this interesting!


Alright. Here's one of my earliest cancelled projects. Near the time the Pokémon franchise was celebrating it's 20th anniversary, I decided to make a random comic that starred a few of my favorite Pokémon! 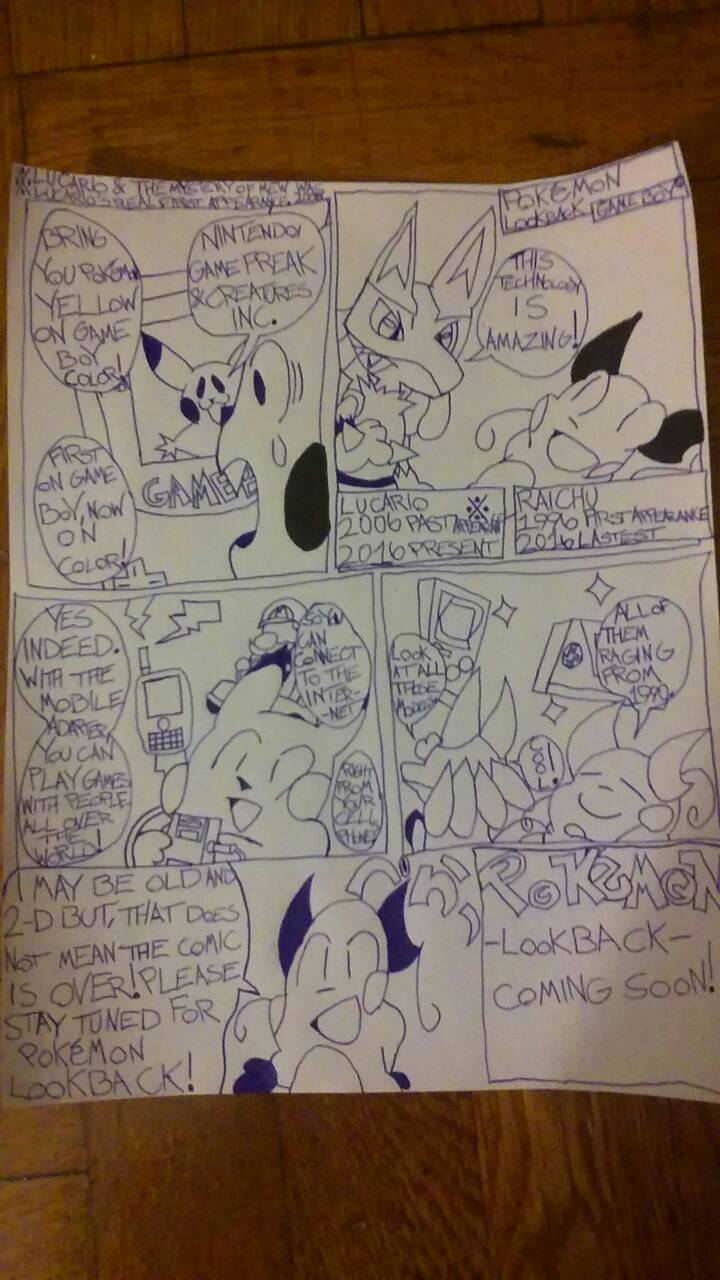 This is the original preview comic. I was a little rusty at art during the time. But I still managed to make a few cool things throughout the year. (Like this artwork of Seadra!) Now, this comic might look pretty nice. But this was made in 2016. And let's just say, I wasn't the most ethical person on the internet back then. This comic was traced from an already pre-existing comic on Pixiv. This is the traced comic. And THIS is the original version. If you thought stolen artwork was bad enough, I also sketched a few pages for what would've been the first comic in the series. 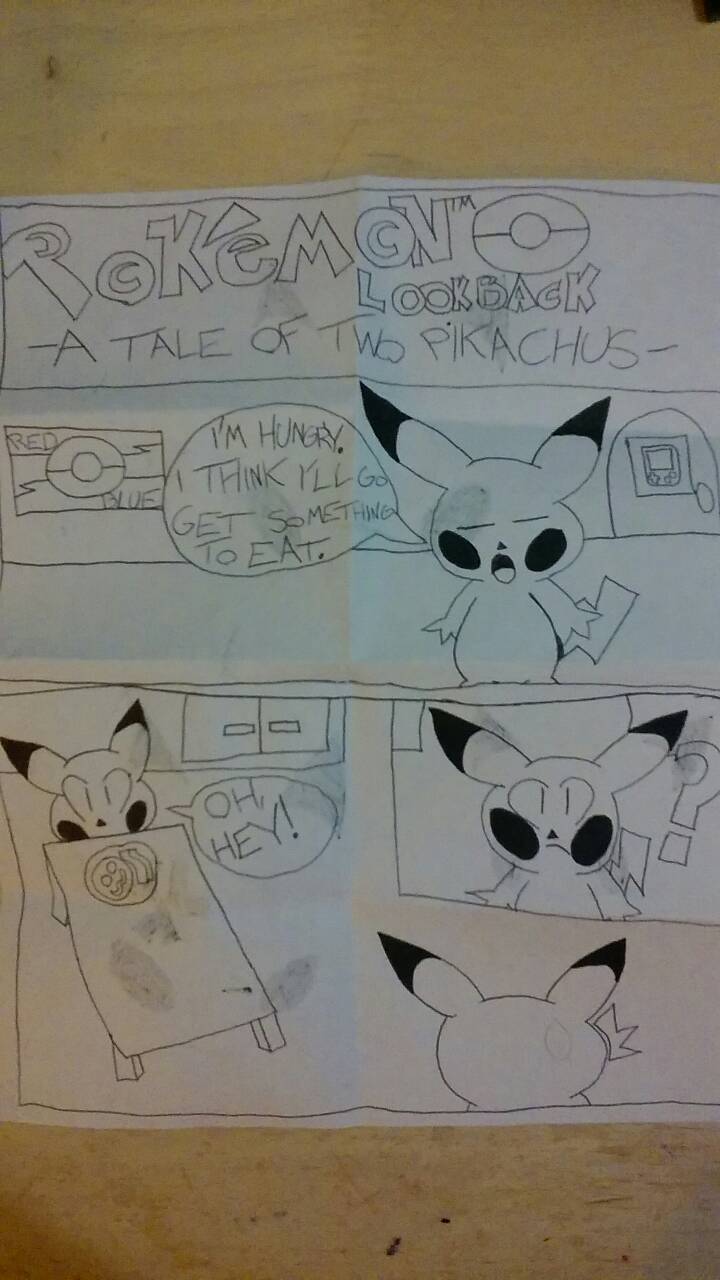 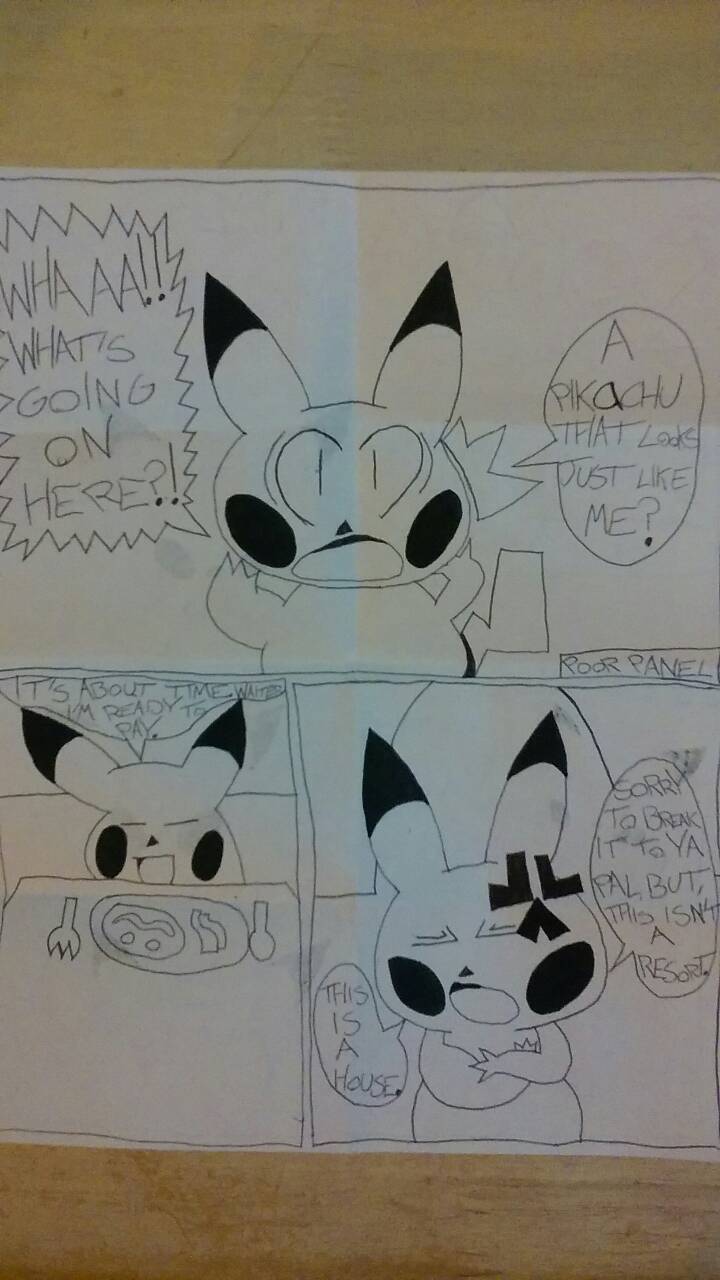 Besides all of that, I made a few pieces of colored reference artwork for the characters. (Including a scrapped Vulpix character who would've been part of the main cast.) Pikachu Lucario Raichu Vulpix It took a while for me to wisen up and think that stealing artwork and ideas wasn't the best way to go in life. And so, Pokémon Lookback was quickly cancelled. (That and I kind of forgot about it after a while...) Before I cancelled it, I signed up for an account on Smackjeeves and published it on there. This is the link for it If you're surprised by the error page, that's pretty understandable. I wasn't aware of it when I was working on this entry. But Smackjeeves shut down right near the beginning of this year. Which means that if your comic wasn't a big hit (Or, you didn't save any of the materials for it), it'd practically be lost to time. Just think about that for a second. There's probably a lot of comics there that can't be viewed anymore. In my case though, I probably don't have anything to worry about. All I posted there were the initial sketch pages. There might be a few comments here and there that might be lost. But I doubt it. All things considered, I GUESS this fan comic would evolve into my Pokémon 4Koma series. (It's got TWO Raichu characters and has completely original art and writing!) I'd end up creating a new Lucario character who would have a bit more personality compared to the Lucario in this series. (I guess the Pokémon Lookback Lucario's personality evolved into Umbreon's.) As for the Vulpix, I never really cared much for her throughout the years since I forgot about Pokémon Lookback. If I have the time, I'm thinking about making her into a redesigned adoptable. (Along with a TERRIBLE Eevee I made around the same time I worked on this comic.)

No, not the Nintendo game. About 2-3 years ago, I was having a tough time with my Algebra... The teacher didn't help either as he never took the time to slow down and was VERY distracted by all the students who barged into the classroom. After a few weeks of struggling, I decided to take the problems I was working on at the time and turn them into a set of mini comics called Puzzle League! The pages were all adapted from algebra problems that I had at the moment. (With a little help from a tutor.) Each page went over the equations and showed you how to solve them with easy to understand phrases, paragraphs, and graphics. Looking through each page, I thought that I could share more of them with the world and help children excel in math. So, I decided to turn Puzzle League into an educational book! I had planned to refine all of the pages once I finally graduated High School so I could submit them to a successful publisher in my region. I had big plans for Puzzle League as after Algebra, I thought about handling other subjects like Science and Literature. (Since I really liked those topics!) Sadly, work on Puzzle League suddenly slowed down due to the fact that I began to immediately lose faith in my math abilities after I continued to get harassed over and over again by a lot of the students. (The teachers didn't help either. As they joined in on the harrassment.) After about a year, I realized that I wasn't going to get anywhere with this book. (Or, math as a whole...) And scrapped Puzzle League to work on my other original ideas alongside my game development career. I never got around to designing any characters for the book. And even though I DID manage to finish a few pages before it's cancelation, my stepmom found them and wasn't too happy with how I was taking my math. She tossed all of the pages into the trash (Along with a few other High School notes.) and yelled at me for hours. Maybe, I wasn't lucky enough to go to a better school were the teachers and students actually treated me right. Maybe, my stepmom should've been more supportive of my learning methods. Either way, I just wish I had a better childhood...

This one brings me back! The project that would give me a bit more experience in things like character design and writing. This was to be a series of web comics that followed the adventures of Rudy Sketchitt and his best friend Laura. 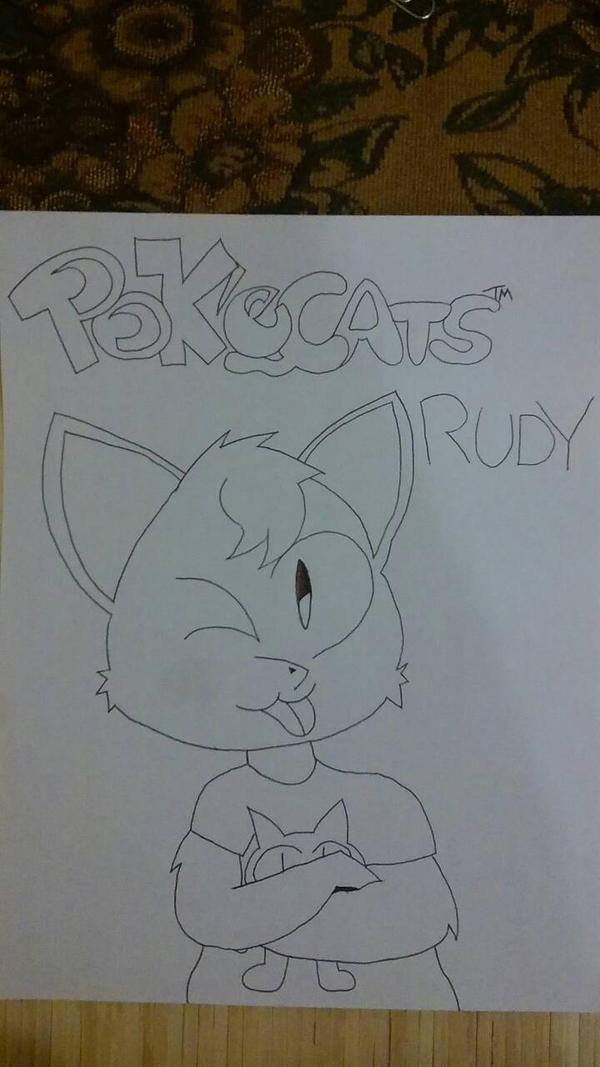 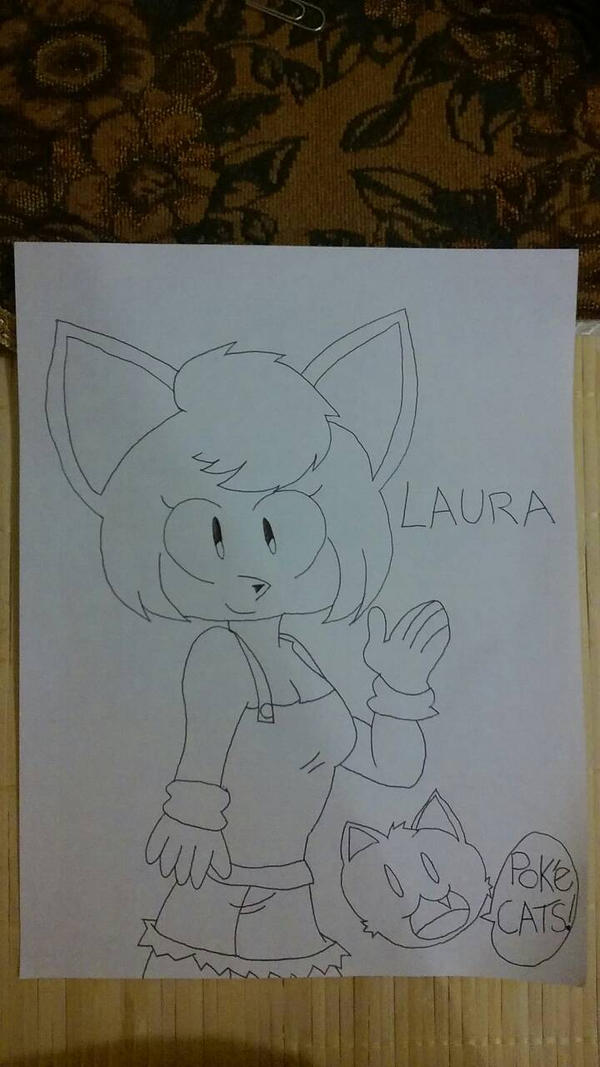 Rudy never really had a last name yet until I started to draw him some more. 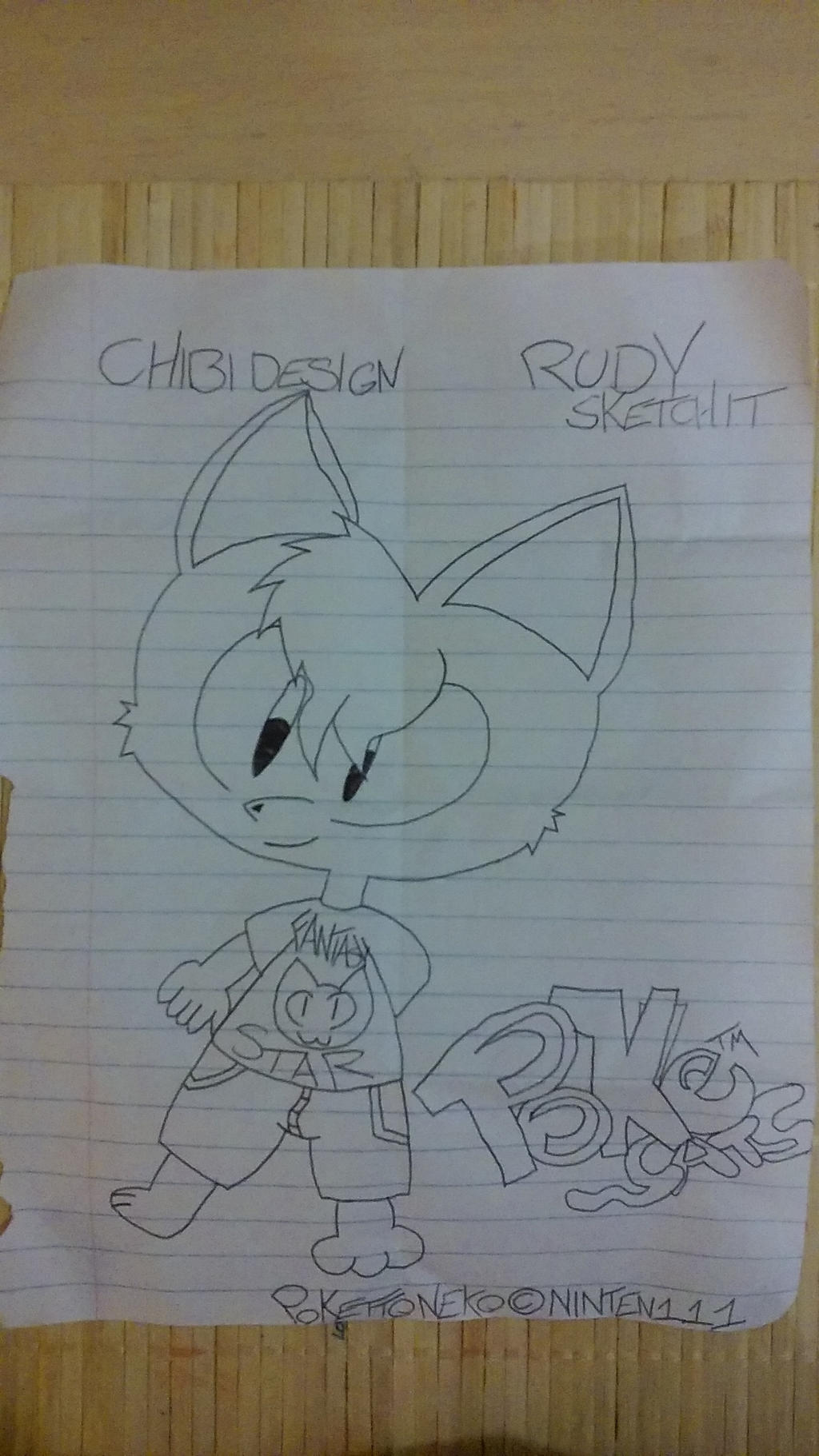 (If you look closely to the bottom, you can make out the Japanese name for the comic.)

Since this was my first REAL project, I experimented a lot when it came to things like character design and writing. Unfortunately, that's where the problems began. I could never come up with any good stories for these characters and I also had trouble designing the supporting cast. It didn't help that I got really busy with school. After a few months passed by, I guess I slowly forgot about this comic's existence. I never really gave it an actual cancelation. But based on how life's going for me now, I don't think I'll be reviving it any time soon.